AN EPIC TALE OF THE INCOMPARABLE QUILL, BOOK 1 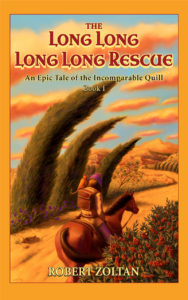 Quantillion Quill, the adventurer whose reputation proceeds him…usually leaving him far behind.

When Quantillion Quill is hired to rescue the Princess Dianara from the castle of the infamous wizard, Caliago, he figures it will be a quick in and out job. But nothing turns out to be the way it seems. Facing magic, monsters, wars, abductions, misunderstandings, and betrayals, Quill and his magical monkey doll companion Chaba travel across the world of Plemora and beyond to rescue the Princess, win a rich reward, avert a catastrophic war, and most importantly, save Quill’s reputation.

“More exciting than my theory of relativity!”
— ALBERT EINSTEIN

“I laughed so hard I nearly puked. Then I read this book.” —GROUCHO MARX

“An absolutely terrible book that you won’t enjoy.” —SATAN, FATHER OF LIES

THE ADVENTURES OF DAREON AND BLUE, BOOK 1 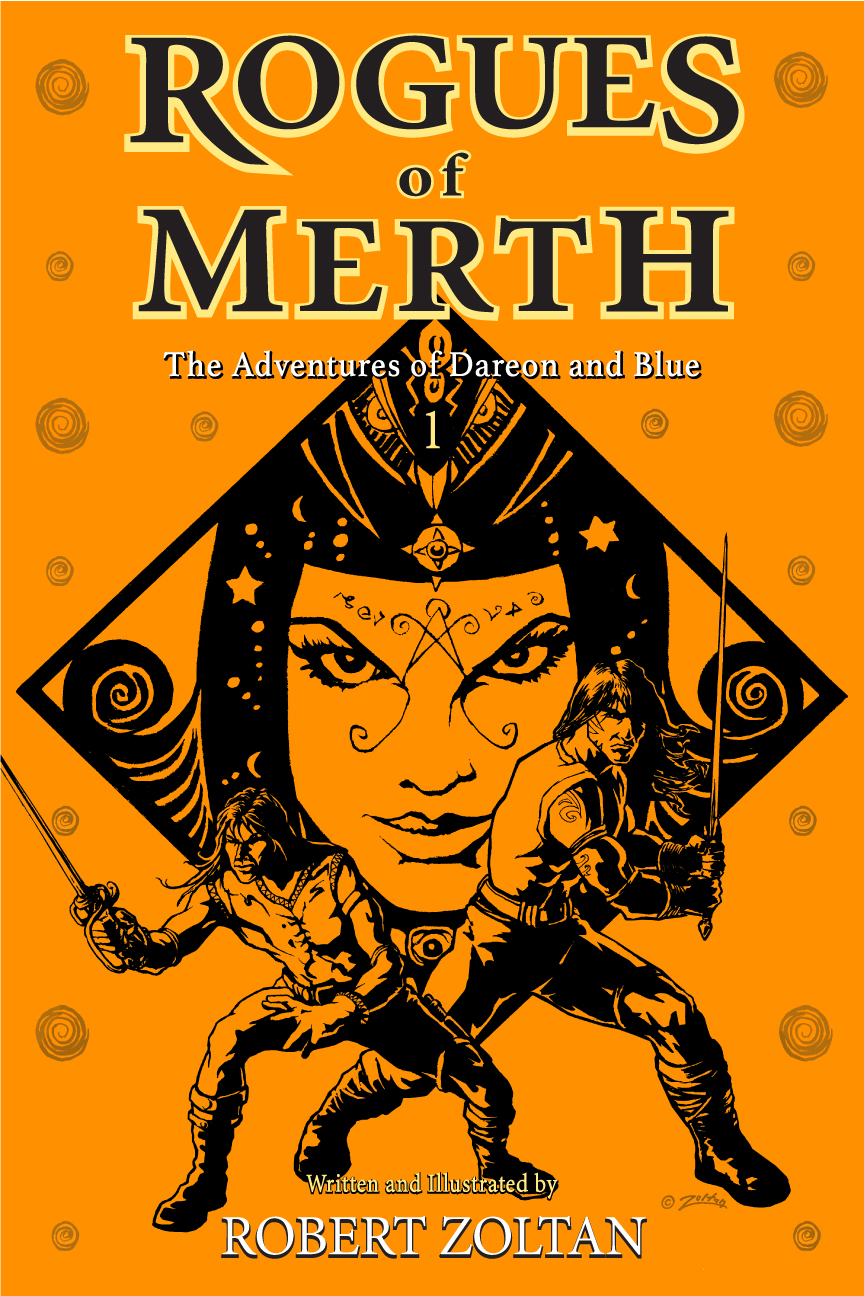 Thrilling Sword and Sorcery Adventure in the Golden Age Tradition!

One Night in Merth, that most westerly city tottering on the edge of the Succulent Sea, a desperate young poet swordsman and an ingenuous young tribal warrior meet by chance or fate or luck. Their unlikely friendship sets them on a course of adventures across the wild mysterious continent of Plemora, where they face monsters, magicians, maledictions, and things nameless and far stranger.

PRAISE FOR ROGUES OF MERTH, BOOK 1

“Zoltan’s Rogues of Merth reminds me of everything in my youth that caused me to fall in love with fantasy in the first place. Lovers of the genre, especially of the classic sword-and-sorcery sub-genre, are sure to enjoy this lively collection.”
— TANGENT ONLINE MAGAZINE (Tara GrimRavn, Reviewer)

“…fans of classic pulp sword & sorcery adventures who are looking for new stories in the genre would be hard-pressed to find better reading.”
— CIRSOVA MAGAZINE

“Colorful and Exciting. The more involved stories show an imaginative force and a real belief in the core of the characters’ motivations that compel the reader’s interest. Dareon and Blue are interesting and involving people to spend time with. There is plenty of room for additional intriguing adventures for this pair of characters, and I for one will be happy to see where their lives lead them.” —RICH HORTON, EDITOR OF THE YEAR’S BEST SCIENCE FICTION & FANTASY

“Dareon & Blue are worthy successors to Leiber’s Fafhrd & the Gray Mouser.” —BOB A. FAUST, AUTHOR OF SCRAPPERS AND BRINK OF BATTLE WAR-GAMES

Rogues of Merth, Book 1 is now available as a paperback and an ebook on Amazon! Sign up for the Dream Tower Media mailing list for more exciting news about the Incomparable Quill series.

BETTING ON THE SHADOWS

CONTEMPORARY AND DARK FANTASY TALES OF
TRANSFORMATION AND REDEMPTION 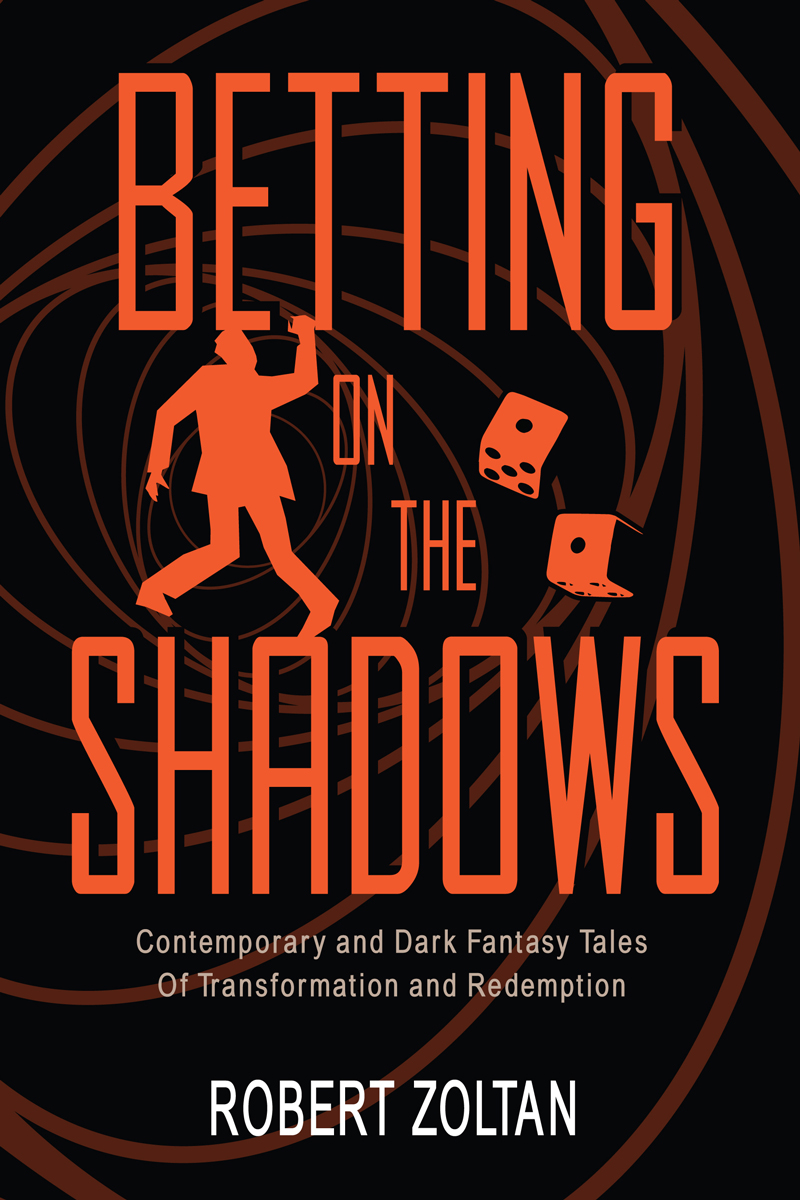 PRAISE FOR BETTING ON THE SHADOWS

Wandering Stars
As failed professional baseball hopeful Sam Sterling tries to pick up the pieces of his broken life, he finds a flyer for a mysterious carnival that suddenly appears in town on the same night that he notices a strange red falling star.

Dross
Professor of English Literature William Gregory ponders his life as he lounges on the sofa in his living room and judges everything to be perfect; until he notices the dark spots on the ceiling.

Luck Is for Suckers
Artie Sterling doesn’t believe in luck until it suddenly all runs out. But then it seems to return when he meets a mysterious beautiful woman in a Vegas casino.

Final Approach
A man flying home from New York to Los Angeles struggles to cope with the loss of his beloved wife and the almost simultaneous gain of an extraordinary power.

Oliver Bane
A brilliant painter is haunted by the success of a hackneyed mediocre talent with whom he attended art school.

Women On The Verge of a Metaphysical Breakdown
A writer who is drifting through life and his career is shanghaied by a mysterious woman at a Hollywood party who is convinced that she is trapped in a dream.

The Last Recital
A man wanders the streets of New York’s Greenwich Village and happens upon a piano recital by a brilliant unknown prodigy.

House of Strange Memories
Two brothers search for their father in the house in which they grew up only to find that the house has grown up without them—and is still growing.

Swing City Seven
A man seeks his estranged brother in a comic shop amidst the windy streets of Chicago and finds himself trapped in an adolescent fantasy.

TOMORROW GIRL AND OTHER TALES
OF TIME TRAVEL, STRANGE DIMENSIONS AND
ALTERNATE REALITIES 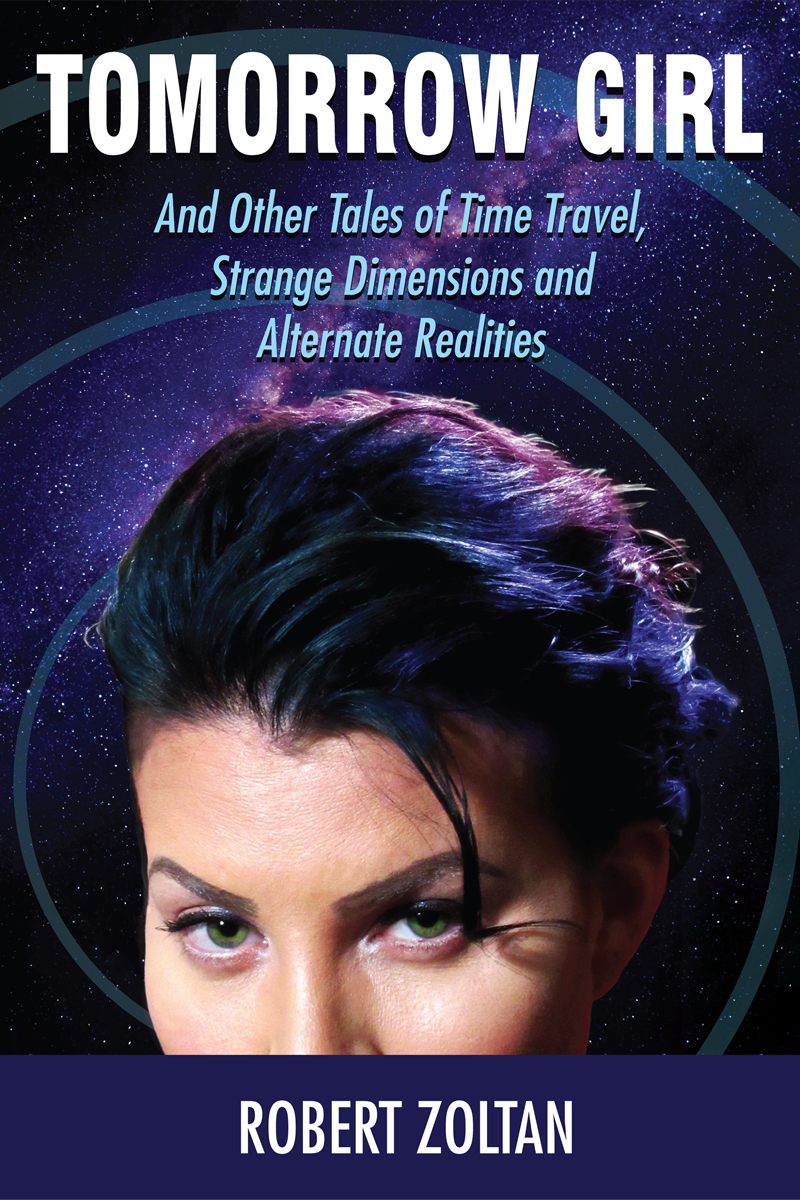 “From 1960’s Hollywood to worlds beyond imagination, secret agents traverse time, space, dimensions, and parallel universes to protect the human race, and inadvertently, fall in love. An electrifying collection with compelling characters!”
— JAY STRONGMAN, AUTHOR OF “RITUAL OF THE SAVAGE” AND FORMER WRITER FOR THE LONDON SUNDAY TIMES AND VOGUE

Tomorrow Girl
A young starlet in 1964 Hollywood is experiencing strange visions, haunting dreams, and inexplicable phenomenon that build to a climax when two mysterious men claiming to be entertainment agents vie for her attention.

The Never Men
While on tour to promote his latest creation, a comic book writer meets a mysterious woman that introduces him to a fantastic world that he believed only existed in his mind.

The Strand
A time agent works to build a device that can transport the woman he loves from an alien conquered world to his side, using the single indefinable strand that still connects their two universes.

Three Kings in Darkness
An aging journalist retreats to a seaside town to escape life and falls into the hands of dark forces intent on mankind’s destruction.

Lazarus Come Forth!
A lab assistant is summoned by his former employer to witness the activation of a device that could pierce the fabric of reality to reveal a dangerous world beyond imagination.

Way Station
A world-weary man makes the dubious decision to move to Los Angeles to find his purpose in life and is unknowingly recruited by a secret organization that fights for mankind’s survival across the stars.

Martian Cocktail
Two time-traveling agents from Mars are sent to 1964 Earth to retrieve a mysterious artifact of unknown power, not realizing their greatest danger lies in their own hearts. 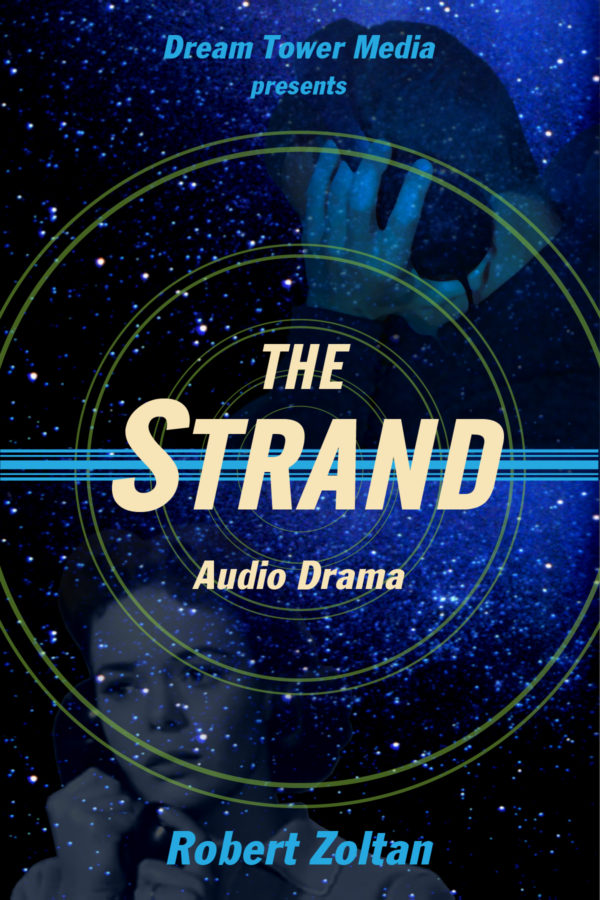 Dream Tower Media’s second fiction release is the romantic retro science fiction thriller, The Strand, by Robert Zoltan. Two Lovers, a universe apart. Guy, a scientist and soldier, Traveler across worlds. Hope, a brave young woman trapped on an occupied world and running out of time. The only thing that keeps them together is his improbable invention: A device that connects his universe with hers by a single Strand.

The story can be purchased as an ebook HERE.
The story was also produced as a thrilling full audio drama!
Purchase your very own copy now for only $4.99!
Click on the button to purchase. After your transaction, you will be redirected to a page with the download link.

The dramatization is produced by Dream Tower Media, with music by composer and songwriter Robert Zoltan  (Kiss the Girl Music), promotional art by Portal Design, and the voice talent of Robert Zoltan and Danita Bayer.

Michael W. Cho, writing for Black Gate Magazine , said: “Robert Zoltan, author, composer, and illustrator, has taken the time to craft a deep and immersive program. His latest offering, “The Strand,” is short, compressed tale, which may have gone without a single commercial break back in the old days. Nonetheless, it contains all the ingredients of compelling drama — passionate characters, a setting bursting with possibilities, high stakes, and a very clever literary device which underpins it all.” Read the whole article here.

Dream Tower Media is proud to present its first fiction release, the mysterious sword and sorcery adventure, The Blue Lamp, by Robert Zoltan. Part of his Rogues of Merth series, The Blue Lamp features the recurring reluctant adventurers, the poet swordsman Dareon Vin, and his Indari warrior companion whom he has nicknamed Blue (his real tribal name is a secret known only to his tribe). 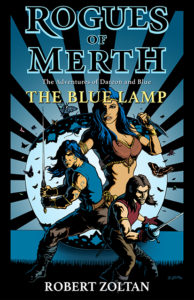 When Blue goes missing in the city of Merth for two days, Dareon’s search for his friend leads him to Ravel’s Exquisite Emporium, where he becomes prey to an unusual predatory salesman. Meanwhile, Blue fights for his life and perhaps his very soul, with the aid of Malika, a dancer from Khulan, against an otherworldly foe that seems omnipotent.

When is danger the safest path? How can you become victorious in a fight you cannot win?

Join Dareon and Blue and find out, in The Blue Lamp!

The Blue Lamp was also produced as a fabulous full audio drama!
Purchase your very own copy below!
Click on the button to purchase. After your transaction, you will be
redirected to a page with the download link.

The Blue Lamp Audio Drama received a rave review from Black Gate magazine! You can read it here.

The dramatization is produced by Dream Tower Media, with music by composer and songwriter Robert Zoltan, promotional illustrations by Zoltan, and the voice talent of Robert Zoltan and Danita Bayer. The Blue Lamp was first published in Heroic Fantasy Quarterly.  Here is some of the glowing praise for the story from editors and magazine reviewers:

Adrian Simmons of Heroic Fantasy Quarterly:
“Adventure fiction in the classic style, Zoltan’s tale will take you from the mundane and into a world of magic and mystery not seen since the glory days of the pulps.”

Fletcher Vredenburgh of Black Gate Magazine:
A (SPOILER), a (SPOILER), and an eerie blue lamp figure in Robert Zoltan’s very fun and self-illustrated, “The Blue Lamp.” For any fan of Sword & Sorcery, those three things should be enough to make you read the story. We know what we like and when we seen it we flock to it like, well, moths.”

Nicky Magas of Tangent Online:
“…the prose, the dialogue, and characters do their part smoothly and come together to give the lesson that two swords are always better than one.”

Recommended Books from Other Publishers

Flame and Crimson: A History of Sword-and-Sorcery 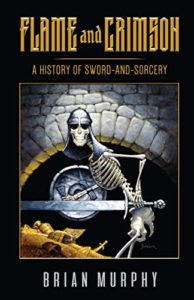 Flame and Crimson: A History of Sword-and-Sorcery provides much-needed definitions and critical rigor to this misunderstood fantasy subgenre. It traces its origins in the likes of historical fiction, to its birth in the pages of Weird Tales, to its flowering in the Frank Frazetta-illustrated Lancer Conan Saga series in the 1960s. It covers its “barbarian bust” beneath a heap of second-rate pastiche, a pack of colorful and wildly entertaining and awful sword-and-sorcery films, and popular culture second life in the likes of Dungeons & Dragons and the bombast of heavy metal music. 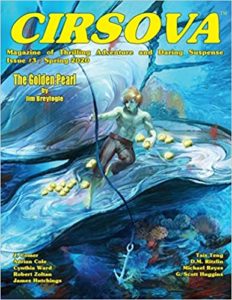 The magazine can be purchased HERE. 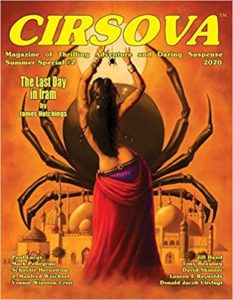 The Summer 2020 issue of Cirsova Magazine features a cover painting by Robert Zoltan and more wonderful stories of magic and adventure!

The magazine can be purchased HERE.

Tales gathered from frozen pre-history, sweltering jungles, and smoky mead halls, legends of this world and whispers of other worlds briefly glimpsed — here then are gathered works of adventure and danger, love and fury, seventeen of the best from the early days of Heroic Fantasy Quarterly.

Edited by by Adrian Simmons, Keanan Brand, and David Farney. 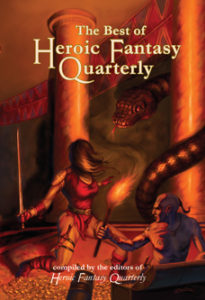 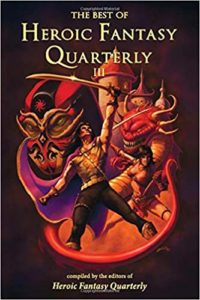