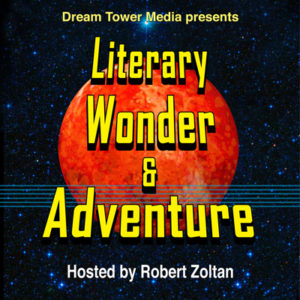 If you enjoyed Literary Wonder and Adventure Show, I continue my conversations with fascinating guests in Sexy Fantastic magazine: https://sexyfantasticmagazine.com/issues/

PLEASE LEAVE A REVIEW on iTunes if you enjoy the show. THANKS!

EPISODE 14 (AUGUST 2019)
Literary Wonder & Adventure Show 14: Rogues of Merth and The Founders of Modern Fantasy: A Conversation with Author and Illustrator Robert Zoltan

Show Notes: Rogues of Merth, The Adventures of Dareon and Blue, Guy Windsor, Edgar the Raven, Founders of Modern Fantasy, influences on story creation, archetypes in story, city mouse, country mouse, city boy, country boy, double acts in fiction or comedy, Fritz Leiber, Nehwon, Fafhrd and the Gray Mouser, Robert E. Howard, Conan, Jack Vance, The Dying Earth, Michael Moorcock, Elric, The Eternal Champion Cycle, C.L. Moore, Catherine Moore, Jirel of Joiry, Northwest Smith, difference between imitation and inspiration, the deep sources of inspiration, the conceptual mind versus the instinctual, why Blue is blue, Native American archetype, The Blue Lamp, Voyage to the End of Time, One Night in Merth, Sails on Scarlet Sands, Citadel of the Seven Doors, inspiration for stories from actual life, theater, bubble stories and episodes, Shakespeare, The Globe Theater, The Twilight Theater, A Midsummer Night’s Dream, sailing, ship adventures, Alan Villiers, Sons of Sindbad, arab dhow, Northern Africa, Freya Stark, The Southern Gates of Arabia, Flaubert in Egypt, late 19th and early 20th Century travel memoirs, alternate universes, alternate dimensions, alternate selves, physics, surreal dreamlike settings, heroes seeking the meaning of life, interludes, experimental novel, poetry, Francois Villon, poetry, The Recollections and Admonitions of Dareon Vin, writing in non-chronological order, A Night in the Library, Heroic Fantasy Quarterly, Scyell, audiobook dramas, audio dramas, audio the next big thing in storytelling, audio is actually the oldest way of storytelling, medieval armored combat, graphic design, illustrations in books, Kiplying Just So Stories, games, gaming, game figures, Fiore dei Liberi, The Flower of Battle, fencing, game printing on demand, The Characteristics of Games, Frazetta chess set, ancient Persian figures, deserts are great places to get lost in, Red Rock Canyon, feeling in the solar plexus, spiritual experiences, Satori experiences, The Farmer’s Daughter, young woman, white wolf, dreams, You Can’t Push the River Faster Than It’s Meant to Go, waiting for the story, mysterious unconscious creative process, channeling from the subconscious or the collective unconscious Rogues of Merth Book 2, grace, being in the present moment, an act of violence against your story and yourself, doing the work, The Diamond Stars, write what you would want to read by your favorite authors, write stories because you want to read them, Paul Andersen, The Lord of the Rings, love of the land, love of nature, Fellowship of the Ring, write what you know and love, maps, Plemora, California, Northern Africa, the Mediterranean, Persia, Stronger Than Blood, amber, It Never Rains in California, synchronicity, coincidence of events, sense of wonder in the world, sense of mystery, the truly mysterious, the numinous, not being afraid to let the wondrous mystery of life in, Joseph Campbell, art that is transparent to transcendence, writing something that has value and meaning as a doorway to joy or mystery or bliss, childhood.

EPISODE 13 (MAY 2019)
Literary Wonder & Adventure Show 13: The Lost Tales of Fritz Leiber: A Conversation with Author and Editor Steven Savile

Show Notes: Join Robert Zoltan and Edgar the Raven as they welcome award-winning author and editor, Steven Savile, for a conversation on discovering Leiber’s previously unpublished work, the writing process, Joseph Campbell, mythology, the perils of world-building, genre jumping, and much more. Plus, Edgar reveals a senses-shattering secret!!

EPISODE 12 (DECEMBER 2018)
One Night in Merth (full audio drama) (From the series, Rogues of Merth: The Adventures of Dareon and Blue)

Show Notes: The origin story of how Dareon and Blue first met, and the first story in Rogues of Merth: The Adventures of Dareon and Blue, Book 1, available now in paperback or for Kindle on Amazon (https://www.amazon.com/dp/0998030309).

One night in Merth, that largest, most diverse, most decadent of westerly cities on the continent of Plemora, a desperate young poet swordsman and an ingenuous young tribal warrior are drawn together by magic, machinations, and mysterious forces that converge upon a single pearl of extraordinary size and luster.

Show Notes: Why boxing is potentially safer without gloves, the earliest weapons, mesmerized by bees on a flower, why long sword fights in fiction are boring, iron versus steel, why swords are the most famous historical weapon, the transcendent word, stupid laws, classic fantasy literature as a spiritual doorway, why the 13th Warrior is both wonderful and rubbish, people who don’t deserve to be represented in art because they’ve ballsed up the whole point of being alive, let people love what they want to love, poetry, the lost art of responsibility, dueling, why the 21st Century is the lease violent era, why Harry Potter is both wonderful and rubbish, snobbery is just a form of fear, fencing swords are too thin, if you are reading a book you need to get a life according to football commentator, reality is not something that can be apprehended by concepts, a bad chair is a bad chair, the sound of silence, the horribly beautiful hand guards of rapiers, Leiber, Conan, Dashiell Hammett, things that work beautifully in competitions don’t work well when people are trying to murder you, going beyond concepts and words, from Excalibur to lightsabers, one-eyed toothless sword masters, the symbol of a warrior, a weapon is just a tool, the beauty of two-sentence fight scenes.

EPISODE 10 (APRIL 2018)
Delta of the Damned (full audio drama) (From the series, Rogues of Merth: The Adventures of Dareon and Blue)

Show Notes: A full audio dramatization of the mysterious sword and sorcery adventure, Delta of the Damned by Robert Zoltan. Part of his Rogues of Merth series, Delta of the Damned features the reluctant adventurers, the poet swordsman Dareon Vin and his Indari warrior companion known only as Blue. The dramatization is produced by Dream Tower Media, with music by Robert Zoltan, promotional illustrations by Zoltan, and the voice talent of Robert Zoltan and Kori Wilson.

Delta of the Damned will appear in the first novel length volume of stories, Rogues of Merth: The Adventures of Dareon and Blue, Book 1, premiering in August of 2018.

Show Notes: Robert Zoltan and Edgar the Raven perform a dramatic reading of The Raven by Edgar Allan Poe. Plus, some interesting trick or treaters come to the Dream Tower door! Happy Halloween!

Show Notes: The Golden Age of Science Fiction, Allen Steele, Tales of Time and Space, Avengers of the Moon, the loss to readers and writers by too much genre specialization, why writers must read the classics, why writers should read outside their genre, how Prohibition and organized crime helped create the Pulp Era and the Golden Age of Science Fiction, how the best classic science fiction is transcendent, why the mass paperback is disappearing, how to avoid genre tropes as a writer, how to survive winters in Massachusetts, missing Kurt Vonnegut by five minutes, Tales of Time and Space, Edmund Hamilton and Captain Future, the real horrors on Jekyll Island, how science fiction is not about the mechanics of a car but about the car mechanic, the subconscious creative process, how to steal like Shakespeare, the raw physicality of writing, pre-Golden Age science fiction, the thin line between fantasy and science fiction, Murray Leinster, Hugo Gernsback, Alfred Bester, Ray Bradbury, Cordwainer Smith, Burroughs, Sturgeon, Van Vogt, space travel, alternate history, robots, time travel, alien invasion stories, Wells, Stevenson, Verne, Asimov, Roger Zelazny, Philip K. Dick, Amazing Stories, Magazine of Fantasy and Science Fiction, Poe and his early science fiction, Russell Banks, Lawrence Durrell, Brad Durrell, Justine, the Alexandria Quartet, Limbo by Bernard Wolf, Michael Moorcock on why you should not read in your genre, Cornell Woolwich, Ross MacDonald, Zane Gray, how Spaghetti Westerns are the best Sword and Sorcery films, how writers were discouraged to write outside their genres starting in the 1980s, the stratification of genres and their fans, keeping an open mind to things you didn’t expect, why Robert can’t stay on topic, John O’Neill, Robert Dunbar, what creates a timeless book, why scientific accuracy in science fiction is unnecessary in the long run, the joy of book spinner racks, how science fiction grew from the American Transcendentalists, Melville, Led Zeppelin, Harlan Ellison, the difference between a writer and an author, Freya Stark, The Southern Gates of Arabia, Nathaniel Philbrick , Sea of Glory, the importance of non-fiction to fiction, Spindrift, reinventing Space Opera, the part in Captain Kirk’s hair, Star Trek, slam bang old-fashioned pulp action science fiction story, Robert Dunbar and saving the Horror genre, The Stars My Destination, Nightfall, the romance of the human endeavor, the human condition.

A Romantic Retro Science Fiction Audio Thriller. Written by Robert Zoltan. Produced by Dream Tower Media. Music by Robert Zoltan. Featuring the Voice Talent of Robert Zoltan and Danita Bayer. Two Lovers, a universe apart. Guy, a scientist and soldier, Traveler across worlds. Hope, a brave young woman trapped on an occupied world and running out of time. The only thing that keeps them together is his improbable invention: A device that connects his universe with hers by a single Strand.

Click here to purchase your very own copy now!

It’s spring cleaning time in the Dream Tower as Robert and Edgar travel to the Hyborian Age for a lively chat with author Howard Andrew Jones! Robert and Howard discuss Robert E. Howard, Conan, childhood, heroes, cynicism, creativity and the lure of lost civilizations. Plus, Robert and Edgar get a couple of vaguely familiar visitors.

The Dream Tower travels to Middle-Earth for Episode 3: J.R.R. Tolkien, Master of Modern Mythology: A Conversation with Scott Oden. Join Robert and Edgar the Raven as they welcome special guest author Scott Oden for a discussion on Tolkien, orcs, creativity, bliss, childhood, and the occult dangers of advanced math. Plus, the Dream Tower gets a couple of unexpected visitors, and Robert and Edgar sing a short but sweet duet.

Robert and Edgar welcome Writer’s of the Future Award winner Ryan Harvey to discuss Tarzan, John Carter of Mars, giant monsters, eugenics, depression, didactic versus pornographic art, and why you might name your son Holbert. Plus, Robert deals with possible Pteranodon infestation around the Dream Tower.

EPISODE 1 (December 2016)
The Blue Lamp (full audio drama) (From the series, Rogues of Merth: The Adventures of Dareon and Blue)

Click here to purchase your very own copy now!

Dream Tower Media is proud to present its first audiobook, a full dramatization of the mysterious sword and sorcery adventure, The Blue Lamp, by Robert Zoltan. Part of his Rogues of Merth series, The Blue Lamp features the recurring reluctant adventurers, the poet swordsman Dareon Vin, and his Indari warrior companion whom he has nicknamed Blue (his real tribal name is a secret known only to his tribe).

The dramatization is produced by Dream Tower Media, with music by composer and songwriter Robert Zoltan, promotional illustrations by Zoltan, and the voice talent of Robert Zoltan and Danita Bayer.